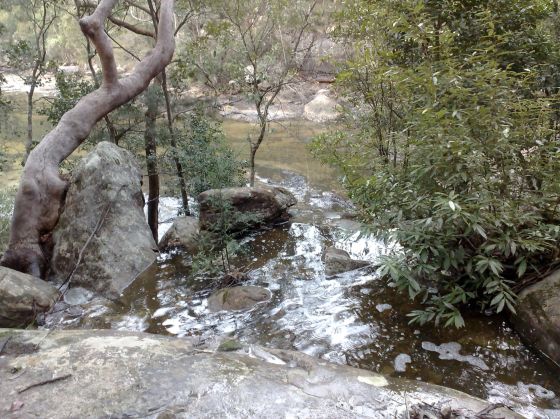 Jerusalem Bay (not far from where I live): a fabulous Angophora hugging the water’s edge

Hello all. This past week has been hectic as many of us are completing essays (and marking!). But I am so pleased that for Australian Literature students the experience of reading the 400 page Miles Franklin award winner (Kim Scott’s That Deadman Dance) has been really, really positive. So much has been understood about the delicate balance in the relationship between indigenous Australians and their environment and the coarse and brutal way in which the European invaders imposed their grasping values on this subtle and beautiful land. Kim Scott does a real service to our understanding of these issues and helps in the process of reconciliation: they were not ignorant savages! They really had a relationship to the land (its plants and animals) and the ocean (those amazing whales) from which we could learn volumes.

This past week we have moved into Colonial Australia looking first at Frank the (heavily punished convict) Poet (what a fabulous iconoclast!), Charles Harpur, Australia’s first colonial born poet, Louisa Anne Meredith, Eliza Dunlop (and a few others). I loved Frank’s vision of a heaven full of convicts and a hell full of all the authorities, both ecclesiastic and state.

At length I found that happy place

Where all the woes of mortals cease

And rapping boldly at the wicket

Or if you have not one to shew

Pray who in Heaven do you know?

Young Troy and Jenkins too

And many others whom floggers mangled…

For he is thoroughly purged from sin…

Isiah go with him to Job

And put on him a scarlet robe

And kill the fatted calf today…

For we shall have a grand repast

Since Frank the Poet has come at last…

Harpur, son of convicts himself, while marginalised by the hierarchy throughout his short life, wrote some lines of poetry that showed he could bring the “tiny not the immense” (to quote Francis Webb) vividly and significantly to life:

With a slanting track of light,

Till rising in the sunshine higher,

This coming week we move into the iconic writers of the 1890s including the Lawsons (Lousia and Henry), Barbara Baynton, Mary Gilmore, and Christopher Brennan…  not to forget Ned Kelly’s “Jerilderie Letter”: so many subversives daring to undermine the crass materialism of the Australian nineteenth century!

In Twentieth Century literature we have been exploring “Art and Spirit” with a focus on Kandinky’s shaping impact on the way ideas of the spiritual are at the heart of much literature and painting of the first half of the century. For Kandinsky it was colour, shape and texture, for T.S. Eliot it was words that “reach into the silence” (“Burnt Norton”). This is the counterbalance to the horrors of war that have been our focus for weeks. I urge all to go to the Exhibition of German Art 1910-1937 at the art gallery of NSW.  This provides a fabulous background to all the authors we are studying in the next few weeks. Here is a great introductory video on the exhibition.

In our journey into the visionary imagination of William Blake we turn this week to the iconoclastic (love the word!) The Marriage of Heaven and Hell. Much will be revealed here about Blake’s view of the poet and artist as the driving force behind spiritual vision, a vision that has become tainted and diminished as it was taken over by religious authority. Blake’s essential purpose was always- I believe- to revitalise practices that had become stale; his art is an art seeking revolution of the spirit in each of us:

The ancient Poets animated all sensible objects with Gods or Geniuses….

Till a system was formed, which some took advantage of & enslav’d the vulgar by attempting to realize or abstract the mental deities from their objects: thus began Priesthood;

Thus men forgot that All deities reside in the human breast. 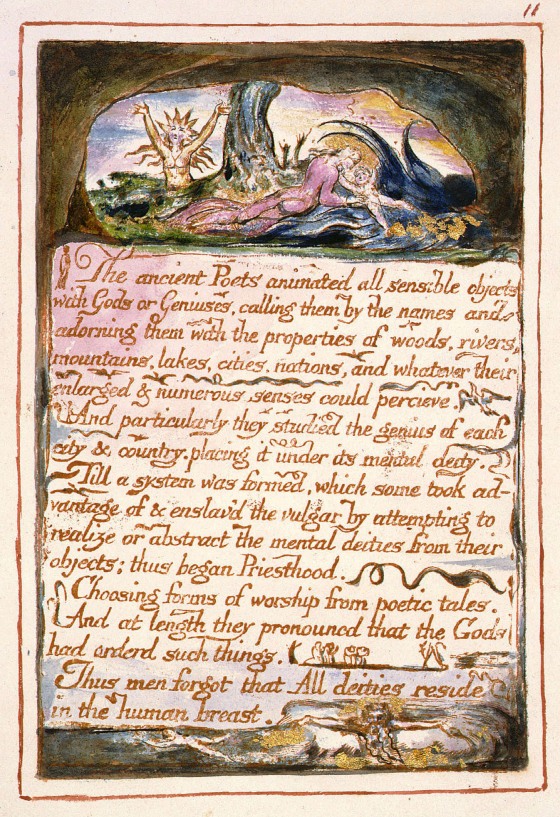