We visited the Shakespeare Room in the State Library today. This room is a wonderful expression of how much Shakespeare has meant to the Australian colony since the time of Captain Cook. One of the first plays ever to be produced in Sydney was in fact Henry IV with a complete convict cast! When you get to know the play you will realise how revolutionary that whole concept is. The play is in many ways an assault on the hierarchy in the way it dares to present the drunken, licentious world of Falstaff as more vital, alive than the world of politics and Kings. At heart Shakespeare was a subversive and this side of him fits in so well with a certain strand of republicanism in Australia. The Shakespeare Room, planned and funded by the Shakespeare Society began its journey into being in 1900, but because of the First World War it took another couple of decades till it all came into existence. The room itself is designed on Elizabethan principles and is modelled on a room in the palace of Cardinal Wolseley. Here is the magnificent plaster ceiling with Chandelier: 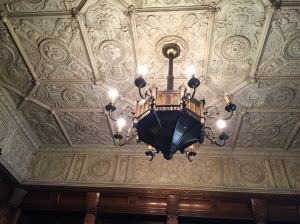 And here is the coat of arms of Elizabeth the First, over the door. 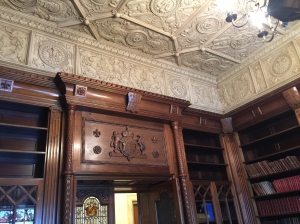 Here is a bunch of students, listening to the complex story of the room’s creation 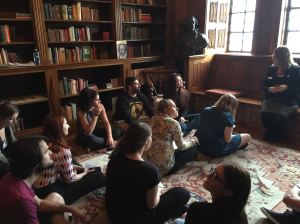 And here are the amazing stained glass windows that depict those wonderful lines spoken by Jacques in As You Like It about  all the world being a stage and the seven ages of man: 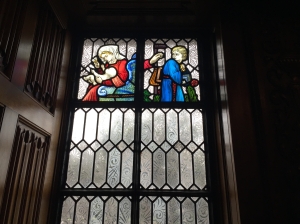 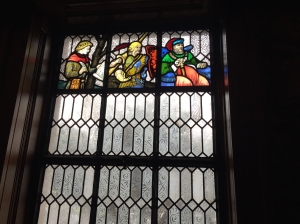 And here is the wonderful Shakespeare Statue which is directly beyond the stained glass windows. It used to stand in what was originally “Shakespeare Place”, but is now between two arms of the Cahill Expressway: such the price of progress. The statue is worth a close visit. It has inscribed on it the most memorable lines from The Tempest about the impermanence of the theatre; this acts as a metaphor for Shakespeare’s heart felt sense of the impermanence of life, for which we need to be deeply grateful, treasuring it for the short time that it is given to each of us: “We are such stuff. As dreams are made on; and our little life. Is rounded with a sleep.” The big fat guy on the right is Falstaff- who we will have the good fortune to get to know much better later next week. 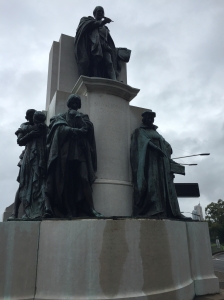 BLOG TOPICS FLOWING ON FROM THIS VISIT:

NO BRAINER: Write a review of what you enjoyed most, learned most from today’s visit to the Shakespeare resources at the State Library!

← Tim Winton, Kate Chopin, Ernest Hemingway- a crowd of rat-bags or visionaries?
Art in the Age of Shakespeare: A Distant Mirror over 450 Years Ago! →

1 comment for “The Shakespeare Room: State Library of NSW- into the bosom of Shakespeareana.”