Margaret Preston may have been roasted on a spit for daring to present Adam and Eve as an Aboriginal couple in offering this painting to the Blake Prize in the early 1950s. How dare one assume that our forefathers had anything to do with Aboriginality!!! Thus spake the right-wing factions of our country 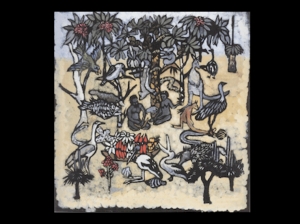 So how did Patrick get away with daring to present his Aboriginal artist Alf Dubbo as Christ, as the source of salvation for an Australia swallowed up by materialism and a total lack of authentic spirtuality? How did he get away with it? Good question. Probably because no one had the time and patience to read past the opening pages of his most amazing novel Riders in the Chariot. Had Australians followed their Nobel Prize winner to that place of “darkness” where the dying Alf Dubbo, a latter-day Christ, re-imagines the beginning of creation, evokes the Deposition & the Chariot of Ezekiel, they would have scoffed at the “insanity” of anyone trying to ennoble the Indigenous imagination in this way. It is all there in Chapter 16 of Riders in the Chariot, a wonderful tour-de-force of one verbal artist (Patrick White) transmitting the vision of his non-verbal central character into canvasses glowing with spiritual affirmation of the created universe. I am strongly reminded here of Brett Whiteley who, like Alf Dubbo, allowed the central panels of his Alchemy to come into being:

The days grew kind in which Dubbo painted his picture. They were of a fixed, yellow stillness. The creaking of cicadas was not so much a noise, as a thick, unbroken, yellow curtain, hung to protect his exposed senses. All other sound seemed to have been wound into a ball a the centre of the town, as he stood and transferred the effulgence of his spirit onto canvas, or, when overcome by weakness, sat on the edge of a scraping chair, leaning forward so as not to miss anything taking place in the world of his creation.

Q.1 Discuss briefly the ways in which you think Alf Dubbo might be based on Brett Whiteley.

Q. 2 Write a letter by Alf Dubbo declaring what he thinks true Christianity is.

Q.3 Write an ekphrastic paragraph or short poem based on what you see in the Brett Whiteley image above.