Patrick White had the extraordinary insight, back in 1961 to write about the amazing creativity inherent in his Aboriginal character Alf Dubbo who plays a leading role in the novel Riders in the Chariot. The novel won the Miles Franklin award in that year and then in 1965 won the Gold Medal of the Australian Literature Society. Patrick White’s instinct to celebrate his Aboriginal’s creative spirit was a powerful support to the gathering movement towards citizenship for all Aboriginals-  finally announced in 1967.

But Alf Dubbo is much more than just an Aboriginal artist, he carries within him a powerful blend of what he has learned through his missionary upbringing and through the creative energy from his ancient traditions that still course through his veins. In a land which has all but lost any hint of true Christianity, Alf Dubbo, despite his desperate sickness, his place as a total outsider to the rest of society, in fact becomes the figure through whom essential Christianity is re-ignited . There is a masterful magic in his creation of the Deposition scene and of Ezekiel’s Chariot which show that through his creative energy he has broken through to a new level of understanding which no one else in the community can match.

This is one of the most powerful celebrations of Aboriginal spiritual creativity produced by a white author in this country. Read this wonderful essay on Patrick White’s religion http://www.abc.net.au/religion/articles/2012/05/28/3512429.htm

In your own words describe a short conversation you have had with any one of the “Riders”: Mordecai HImmelfarb, Mary Hare, Mrs Godbold, Alf Dubbo

Write a paragraph describing a painting using Patrick White’s technique of taking you inside the artist’s thinking. Chose a painting that you are not familiar with and reproduce the painting in your blog then write a “Whitean” description of the artist creating this work.

Remember you can always construct your own question as a blog topic for this week (you might even find an interesting topic through the work you have been doing in preparing your “Blake” performances…..

Bosch’s Crucifixion upon which Patrick White probably based his scene in which Mordecai Himmelfarb, the Jew, is crucified by the Australian “Blue” on Good Friday. 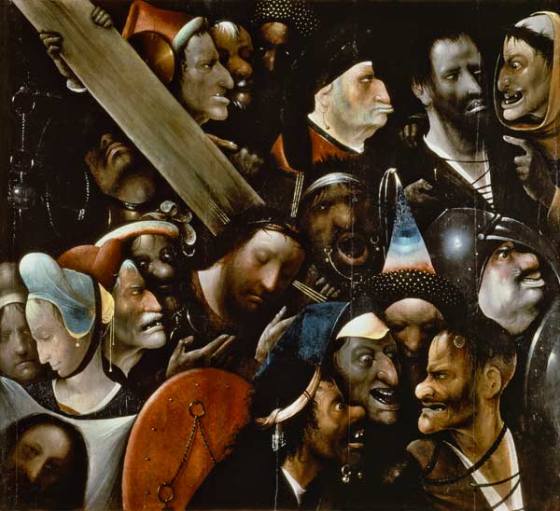 ← Jerusalem Bay- Taffy’s Lookout: Spring Day
George Orwell: The Creation of an Orwellian Backbone as a Way towards Purifying the Human Condition. →