We were all nearly jumping out of our seats with this rocking performance of a film that we had studied. All were asking the question: how can you turn a graphic, violent story into a musical? Would anything be lost in the process? Outside the theatre the advertising banners were promoting it as a blend of West Side Story & The Jersey Boys!.

So what was it like? Have the student group said “That was the bes!” Certainly the music, especially the powerful floor-shattering bass held you in its grip, as did Hudson Loverro’s starring role as the young Calogero. Hudson is making his Broadway debut in this role- and he is less than 10 years old!!!

Overall the musical did tend to flatten out some of the moral issues presented in the play. From where I sat I felt, in particular that at the very end the differences between the influences on Calogero’s by his father and by Sonny (played by Nick Cordero), these influences were flattened out. Both Sonny and C’s father were given an equally positive role in C’s formation. I felt that the film seemed to sway more strongly away from Sonny’s influence. Not sure what you might think about this.

We had some interesting questions at the end: which of the three plays did you (students) prefer and in what order. We got a wide range of differenes. There was no clear consistency in what students enjoyed best amongst: The Waitress, Jitney and A Bronx Tale. Discussions will help to bring these differences to the surface. Thank you all for your eager and wholehearted involvement in all the events that we have put together for you.

Tomorrow it is off to the MET, followed by Central Park (with reference to Caulfield and Gatsby); Sunday we head off to Harlem complete with a African/ American Spiritual Mass.

Here is the opening stage set: this expanded miraculously during the performance with actors appearing at all different heights from the top to the bottom of the stage. 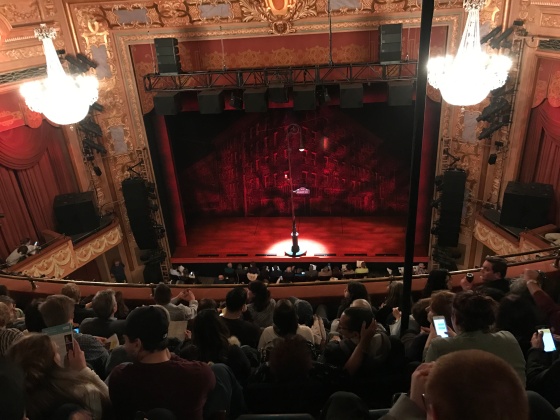