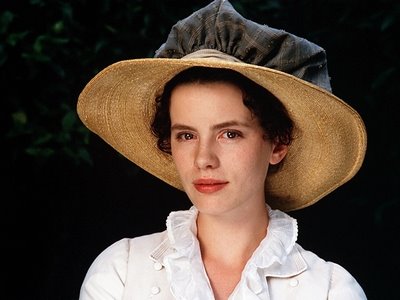 Jane Austen’s Emma may on the surface seem to be a book about the privileged middle and upper class society of the late 18th and early 19th Century in England. Yes, on its surface it seems to be a typical novel about the upper-echelons of the English moneyed class. However, a close reading of the drama that takes place in and through Austen’s central character reveals a deep and searching exposure of the way human beings in all ages are trapped by the mechanics of their egos. This applies to nearly all the characters in Emma but centrally to the heroine Emma herself who thinks she knows what is right for others and tries to construct the world to give her the sense of control and mastery over the fate of others. There is however an agent in the wings (by the name of Mr Knightley) who right from the start tries to show her the errors of her judgements and the arrogance of her assumptions about other people’s lives. But it is not until near the very end, by which time she has managed to mire herself in the negative outcomes of her many manipulations, that she is able to listen to this voice of conscience. Her obsession with controlling the fate of others brings her to a dramatic crisis in which she suddenly, painfully, discovers the truth about herself, about her own egotism – and about her lack of knowledge about her own deepest nature. Chapter XI in Book III is the place where this extraordinary climax occurs in the novel:

With unsufferable vanity had she believed herself in the secret of everybody’s feelings; with unpardonable arrogance proposed to arrange everybody’s destiny. She was proved to have been universally mistaken; and she had not quite done nothing – for she had done mischief. She had brought evil on Harriet, on herself, and she too much feared, on Mr Knightley.

What an extraordinary insight Jane Austen gives us into the construction of human vanity that plagues every human being at some stage of the their life. Twenty-one year old Emma is lucky that she comes to this discovery so early in life (in the gentle and generous hands of her nearly 40 year old creator, Jane, 2 years before her own death!). This is a wonderful book about the journey of the human soul towards an understanding of its deepest failings and its journey towards a knowledge of its deepest truths. So while this book may on the surface be a late 18th Century, elegant “Romance” how amazingly deep it is in its exploration of the human psyche!

So here are some Blog Questions for your second blog (due on Monday 27th March at 11.59pm):

CREATIVE: Write a paragraph imagining yourself as Emma, discovering that your plans for a “friend” of yours have completely back-fired and that you now realize that you really knew nothing about your friends true needs.

CRITICAL: Both Mary Wollstonecraft and Jane Austen are concerned with the way women lead their lives. Do you think there is any difference between what Austen and Wollstonecraft propose about how women should spend their time?

CREATIVE: Write a paragraph imagining yourself as Mr Knightley responding to Emma’s discovery that Harriet now loves Mr Knightley himself.

CRITICAL: It has been said about Jane Austen that she is basically trying to show her readers how they should live their lives. Do you agree with this statement?

CREATIVE: Write a short review of what you imagine might be the sequel to Emma (imagine it is out in the bookshops now).

CRITICAL: Write a letter that responds to this early criticism of Jane Austen’s Emma when it was first published:

“A soppy romance with totally unrealistic characters set in an isolated village that has got no relevance to wider human society. I can’t recommend this book to anyone!”