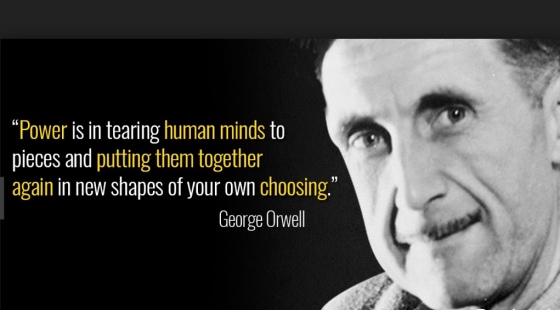 Audio Lecture on George Orwell’s “Shooting an Elephant” and “Politics and the English Language”:

George Orwell who experienced the horrors of imperial exploitation when working as a police officer in Burma began then to think of ways in which he could challenge corruption in politics, indeed in all human affairs, using his gift of language. Language for Orwell was man’s most creative as well as his most destructive tool. Orwell was determined to unleash his own capacity for seeing the truth, into his writings, especially “Politics and the English Language”and 1984. In these works he wanted to show us what was wrong about our use of language and our blind belief in whatever anyone said. He wanted to teach us how to rectify, clarify, transform our own understanding of ourselves and the world by being much more sensitive to how we use words. His essay “Politics and the English Language” is a blueprint for how we might begin to take responsibility for our language, and in so doing how we might begin to take responsibility for the language-controlled world in which we live. As future English teachers or future journalists or future editors or public servant,  if we develop an Orwellian Backbone we will have the power to stand against the erosive and destructive forces of the media, of politicians, of war-mongers; this is the essence of Orwell’s message…

1.Write a letter thanking George Orwell for his amazing insights into how we might shape the future of the world by taking more care of our own writing habits.

2. Following in line with Orwell’s essay “Shooting and Elephant” recall a moment in your own life where you have been forced to do something that you did not want to do, just because you had to keep up appearances. Use Orwell’s last sentence both as the title of your piece and as the last sentence of your piece:

I often wondered whether any of the others grasped that I had done it solely to avoid looking a fool.

3.Give an example from our own times of the way political speech and writing is “the defence of the indefensible”.

4. Remember that you are always permitted a topic of your own: critical or creative.