Today we began by exploring the life and language of Francis Webb, especially his poem “Five Days Old” which gives such a deep insight into the way he uses language to transform his experience into such a momentous event.

We then had the privilege of having as our guest the poet Judith Beveridge who spoke about the place and purpose of poetry in her life and then proceeded to give wonderful readings and expositions of a number of her major poems, including some from her most recent published collection Sun Music: New and Selected Poems (Giramondo Press)

Our tutorials brought into focus the fact that Frank Webb and Judith Beveridge have a number of things in commons. For instance they both have a deep appreciation for life, they both show how much is to be gained from the seemingly insignificant details of life and the way they both transform the ordinary into the extraordinary. Judith Beveridge spoke at length here about how her choice of imagery was her way of allowing her readers to discover the world in a new way. And yet there were some key differences between Judith Beveridge and Frank Webb. One student commented perceptively that Webb focuses on the “World Within” where Beveridge focuses on the “World Without”. Is that true or not? An interesting question. You can see on the white board image below how that discussion generated quite a powerful discussion on the similarities and differences between these two poets. For example one student commented on the fact that Judith uses specific tactile things like the sound of  birds feet on a tin roof to draw her readers into a world seen as if for the first time. In contrast Frank uses nature imagery to draw us into more metaphysical and theological reflections, for example is his image of the groping eyes and the absorbed skies.

Yesterday’s lectured focussed for the first 50 minutes on Francis Webb  (in particular “Five Days Old”); the second 50 minutes was Judith Beveridge speaking on the nature of poetry, on spirituality in poetry and then on her own poems, in particular “The Saffron Picker”, “Man Washing on a Railway Platform Outside Delhi”, “Flying Foxes, Wingham Brush” and “Yachts”.  These poems are attached here: Judith Beveridge Poems from Anthology; 2 Additional Poems by Judith Beveridge 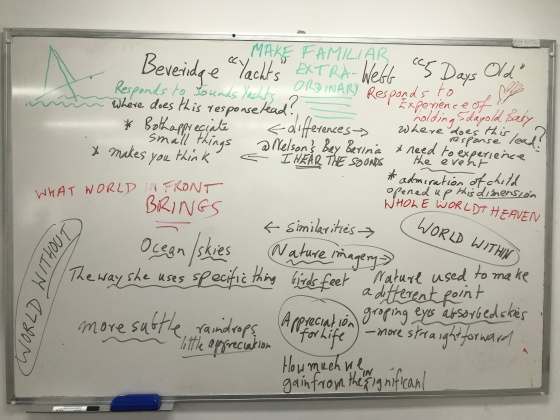 Elaine Lindsay’s PowerPoints for her tutorial are here: week 10 overview

1/ What did you learn about the importance of form in poetry through Judith Beveridge’s lecture?

2/ Chose the first line of any of the poems distributed today and compose your own poem based around the theme or idea of your chosen line and pay special attention to the form you give your poem and how you judge when to end your lines.  [Remember Judith saying that young poets often end their lines at the natural grammatical breaks, poetry however, often enjoys the break that comes unexpectedly]

3/ Write a letter to either Judith Beveridge or Francis Webb telling them how one of their poems has made a deep impression on you.

4/ Create a mini digital kit which presents a list of resources for either Beveridge or Webb. In your kit make sure you provide your readers with a brief suggestion on why you have chosen these resources and not others.

5/ Always: create your own topic that arises from anything that we have discussed or commented on today.

← Alf Dubbo and Mordecai Himmelfarb
Nation, Race and Language- The Fate of the English Language at the End of Empire! →