Today’s lecture began with some further comments on the poetry of Francis Webb. In particular I looked at “End of the Picnic”, “Black Cockatoos”, “Banksia” (from the Eyre All Alone sequence and “Harry” (from the Ward Two sequence.  The first part of today’s audio lecture covers these poems.  Enjoy listening! 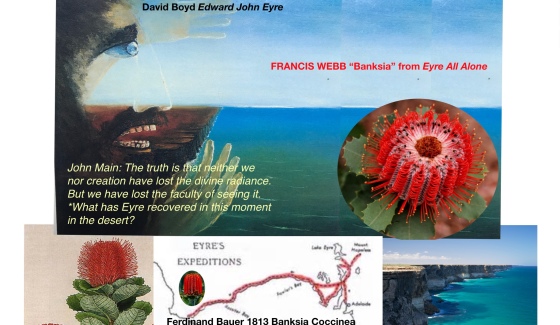 We then moved on to David Malouf’s Fly Away Peter, but I thought it worth while reviving memories of exactly one year ago  when David Malouf was on campus with us. Back then he gave us a wonderful lecture on Fly Away Peter, but he also spent time sharing with us his sense of how we need to read his work, indeed any great literature, in order to connect with the experience that it is trying to engage us with. Literature, as he said, is not about simply gleaning information, but is about immersing yourself in an experience of words, chosen and shaped, to take us to somewhere where we have perhaps never been. And by this he was meaning somewhere “in ourselves” as much as somewhere “geographically different”. His key to finding the connection with the kind of experience that literature offers is to read    S…. L…. O…. W…. L…. Y….. For example we need time to take in the symbolic implications of certain scenes, for instance where Jim is  pushing the flat-bottomed boat through the muddy water with Ashley and his friends on board  (Chapter 4):

He would push his pole into the mud again, and putting his shoulder into it and watching the birds flock away, and they would ride smoothly in under the boughs. Nobody spoke. It was odd the way the place imposed itself and held them…. And maybe, Jim thought, this is music too, this sort of silence.

What he could not know was to how great a degree these trips into the swamp, in something very like a punt, were for Ashley recreations of long, still afternoons on the Cam, but translated here not only to another hemisphere, but back, far back, into some pre-classical, pre- historic, primaeval and haunted world… in which the birds Jim pointed out, and might almost have been calling up as he named them in a whisper out of the mists before creation, were extravagantly disguised spirits of another order of existence… a water journey in another, deeper sense; which is why he occasionally shivered, and might, looking back, have seen Jim… as the ordinary embodiment of a figure already glimpsed in childhood and given a name in mythology, and only now made real.

David Malouf asked the class whether anyone could identify who this figure in mythology might be. As noted by one student it is indeed Charon, the ferryman who takes the dead across the river Styx to the underworld. So reading this scene (and all scenes) slowly and carefully does reveal layers of meaning not immediately apparent. When you do understand who this mythological figures is, then you also begin to see how this innocent event on the flat-bottomed boat is, in some much deeper sense, connected with the ending of the novel, with the novels preoccupation with life and death and the question of what divides these two realms of human experience.

With reference to David’s mysterious use of language there was one very interesting question from a member of our audience who asked why David wrote such incredibly long sentences. His answer was interesting. He spoke of being inspired by the Stream of Consciousness methods of writers like Virginia Woolf and James Joyce and he spoke of the need to get inside the mind of his characters and describe the world through their consciousnesses. He suggested that if you look at the workings of your own mind you might see similar processes at work. Our minds don’t usually like full-stops. He spoke also about how, as readers, we need to attend very carefully to the question of whose consciousness we are now in. Sometimes it might be Jim Saddler’s, sometimes it might by Ashley Crowther’s. Sometimes it is not so easy to tell, so it is important to read very  S…. L…. O…. W…. L…. Y…..

1/ Write a long sentence that matches the way that David Malouf enters into a character’s consciousness. Introduce the sentence with a short sentence so that your reader knows what or who you are trying to dramatize.

2/Do you have an appreciation of the natural world that matches either Ashley Crowther’s or Jim Saddler’s? Describe some of its elements.

3 /Drawing inspiration from the closing scene of Fly Away Peter describe a surfer managing a wave.

4/ Why is David Malouf so critical of conventional education (as experienced by Ashley Crowther)?

5/ Remember you are permitted to create your own blog topics.

And here are the white-board images that went with this tutorial:

And here are Elaine’s slides for her tutorial:

← Alf Dubbo (artist), potential redeemer!
“Wherever I hang my knickers – that’s my home.” →