Falstaff is one of those amazing characters who, although from many points of view, is just a “bad” man, from other points of view he is the life of the party! Intelligent, witty, full of good humour, full of appreciation of the good things in life and scathing about those things that drive ambition: “honour”, for example! The Globe Theatre produced a fabulous version of Henry IV with Roger Allam as Falstaff and Jamie Parker as Prince Hal.  Roger is a massive man who fills the role beautifully and who creates a sense that the whole play is essentially about him and that he really does have something to teach young Prince Hal:

Orson Welles of course also filled out this role so magnificently in his film Chimes at Midnight in which he turned Falstaff into the figure upon whom the whole future well-being of England depended (click on image!): 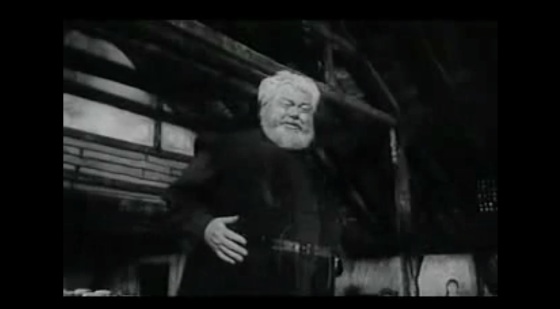 It is interesting to note that despite Falstaff’s subversive presence -exposing the hypocrisy of those in power- he was truly liked by Elizabeth the First !  So maybe this indicates Shakespeare’s sense of how Falstaff, despite his seemingly outrageous behaviour is something that is a valuable component of society. If we were all so solemn and serious -as the King and his courtiers – life would be a boring, lifeless realm. There is also the question that while Falstaff indulges himself in petty crime, does it truly compare to the crimes against humanity that are committed in the name of those in power: George Bush and Iraq; Tony Abbott and refugees being sent to Cambodia!

1. How well suited to their roles do you think were Roger Allam and Jamie Parker? What did the casting of these two characters add to the presentation of these two central characters?

3.Remember your are permitted to create your own topic building on what we are doing in class and adding your own experience to this! Enjoy.