Let the Force Be with You 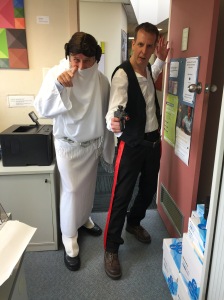 Two Star-War Celebrities, Princess Leia and Han Solo visited and adjudicated the 8 performances from Oscar Wilde’s The Importance of Being Earnest and Bernard Shaw’s Mrs Warren’s Profession today in Murray Hall. The association between Star Wars and these two classic drama pieces is completely random although one could argue that George Lucas’ vision of a force that could bring enlightenment to a darkened world is not completely out of harmony with either Wilde’s or Shaw’s ultimate purpose. Both were committed to exposing the  hypocrisy and the deceit that keeps the world running on empty! Thank you to all those who took part in this series of amazing short sketches from both plays. There was a real sense of having seen the essence of each play in the four sequenced vignettes. Results will be posted soon!

Help Me, Obi-Wan Kenobi. Your’e My Only Hope.

Let the Force Be with You