The New York Library is an amazing building with incredible literary, dramatic and artistic resources. You MUST visit here before you leave. In particular you should check out the extraordinary exhibition on the BEAT GENERATION that is directly in front of you as you enter the library. Here is the library and here is what the entry to this special exhibition  looks like: 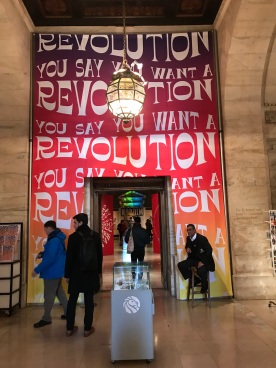 The exhibition is described as a showcase of that huge reaction AGAINST the status quo that occurred in the 60s around the world and especially in America. After the second world war there was such a hatred of government that had led people into the blood bath and there was also such a hatred of the commercialisation in the world’s economies that had allowed this to happen. Here is a good summary shown at the start of the exhibition:

The exhibition featured the powerful work of the Beat Generation that incorporates the sexual revolution. Names like Bob Dylan, Allen Ginsberg, Germaine Greer and others were presented with vividly relevant documents from all of these. The sexual revolution dared to confront middle-class repressive attitudes to sexuality, both amongst the LBGTQ group (whose site we saw the day before yesterday in Greenwich Village) and amongst the heterosexual community. Germaine Greer editor of the magazine SUCKS resigned because of the failure of her co-editors to follow her sexually challenging lead. You can see some very explicit images from her work on display (unpublishable here!)

When you go into this exhibition look out for a guide who took me around all of this with a wonderfully detailed commentary. Ask at the desk when the next tour is on: 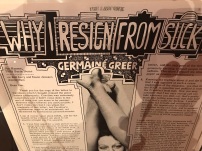 The other obstacle to the liberation of the 60s was America’s reengagement with War through its response to the Viet Cong. This became a flash point for young Beats who felt that we were being dragged again into an horrific destruction of innocent lives. One young artist used a famous image from Goya to present this attack on war:

Compare this to the original “Saturn Devouring His Son”:

But the strongest moment in the exhibition was their presentation of a short story by James Baldwin and especially his response to Angela Davis:

Here is the handwritten letter that James Baldwin wrote on this momentous occasion: 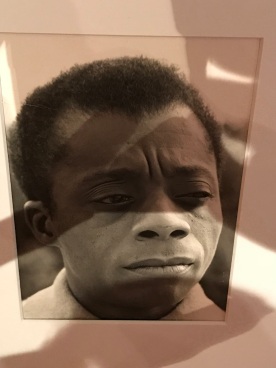 So please go and see this exhibition and get on a guided tour for it? You will be opening your mind to a really important moment in contemporary history that helps you to understand so much of what was going on around and after Salinger, Ginsberg, Kerouac and O’Hara…..

Finally here are a few shots of some of the amazing interiors of this library. Not to be missed: