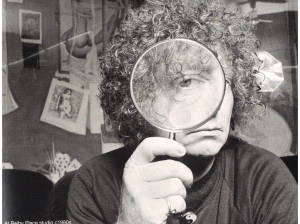 To make good sense of this, you do have to see this in the context of the whole painting (which can be observed at the Brett Whiteley Studio). For reasons of copyright and permissions, no more than this segment -as a close-up- can be shown here. If and when you do get to the Studio you will have to get down on your knees to find this iconic “grain” which is barely visible to the naked eye.  Here is a distant panoramic shot of the entire work (Click on this – and any of the images- to get a closer look):

After inspecting this vast work, stretching from the blue ocean on the right, to the transfigurative golden sunon the left we visited William Blake’s set of all 21 engravings inspired by the Book of Job, provided to us on request as a special exhibition in the Print Room at the Art Gallery of NSW (thank you especially MIriam!):

Like Brett Whiteley’s masterwork, this series also depicts a journey. Blake’s series is a journey from a static, rational and moralistic religion (defined by the caption “The Letter Killeth”- which you can see inscribed on the plinth underneath Job in Plate Number 1) through to an ecstatic, emotional sacred experience (“Spiritually Discerned”)- this end-point is also inscribed on this same plinth, foreshadowing the later development. This is how Blake translates his understanding of the Job who at the start lives only by the book and who at the end of his journey embraces an experience of the divine that is evoked through imagination and through the joyous appreciation of the body in harmony with music, symbolizing an inherent divine creative force. That is perhaps one way of describing what occurs between these two plates (1 & 21) at the beginning and end of the cycle (these are photographs taken of the actual prints, one of only twenty sets extant in the world today). When we were there, you could almost smell the artisan’s clothes that William Blake must have worn as he carefully lifted these engravings off the printing equipment set up in his studio on the South Bank of the Thames in London: 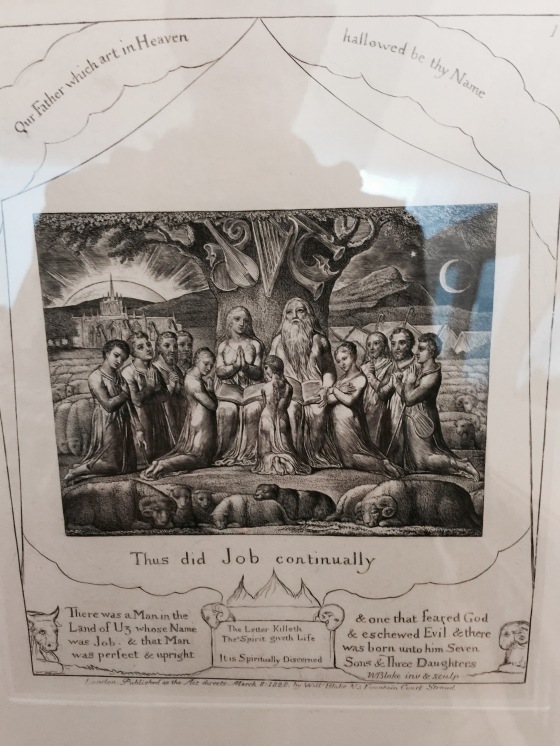 At the heart of this amazing set are the two engravings that depict the breaking or turning point at which the Old Testament turns in the direction of the New Testament.Which are these two plates? They are plates 11 and 12.

11 depicts Job’s horrific dream in which he is tortured by the uncertainty as to who and what God is. Is He a tyrannical, satanic, demonic force, driving Job almost to the point of suicide? In this engraving God is depicted with a cloven hoof.  Is this the God of the Old Testament, who for Blake was very close to the actual Devil in his tyrannical, punishing, moralistic role? Is this the culmination of all that painful moralizing which Job had to endure from his so-called friends who were convinced that all that happened to him was his own fault and that he needed to wake up to the fact that he was in essence a Very Bad Man?

What is also so central and powerful in this eleventh engraving is that here Blake discovered -in the actual text of the Book of Job- a deep rationalefor this set of engravings. So what was it that caught Blake’s imagination so profoundly in the Job text? It was this: “Oh that my words were printed in a Book that they were graven with an iron pen & lead in the rock for ever. For I know that my Redeemer liveth…” Out of the depths of Job’s despair there is this powerful affirmation and this wish and desire that he, Job, share his story of persecution and redemption with humanity for all time.

Indeed Job’s story is one that touches the heart of humanity in all times because of its exploration of a fundamental question: why do we have to suffer, what does suffering mean? So when William Blake read these lines he was profoundly motivated to follow Job’s wishes and do exactly what this 4000 year old character in the Old Testament had demanded: he, Blake, took up HIS engraving tools and captured HIS understanding of the transformative story embedded in this ancient legend. Of course it is a truism to say that Blake saw his whole difficult life, as being profoundly mirrored in the Job story!

And then the next engraving (Plate 12) is like the dawn of a new age.Suddenly there strides before Job a young man who points up at the stars and in the top left of this engraving there is an extraordinary caption which declares “In a Dream in a Vision of the Night/ in deep slumberings upon the bed/ Then he openeth the ears of Men and sealeth their instruction“. This is as if to say that there is a different way of understanding the divine, beyond reason, beyond moralising. It is a way of understanding, mediated by wonder, by the imagination, a way that leads Job into a totally new relationship with himself and with the divine. From here on (as in the actual Book of Job) Job is touched by the power of poetry, of vision and of the imagination. The remainder of all the engravings show aspects of this extraordinary turn-around in Job’s experience. Quote after quote on the remaining engravings reinforce this appreciation, this wonder, this recognition that there are things way beyond our normal human understanding, things that nevertheless give us a taste of the ineffable, of the divine… no wonder there is such joy, love and open appreciation in the last engraving in this series.

One final comment needs to be made to students studying these art works within literature: you will have noticed how much both Brett Whiteley and William Blake depend upon words to broadcast their message, to deepen their meaning. All Blake’s visual images are literally encased in words (from the Old and New Testaments, from Religious authors, from his own imagination) and Whiteley’s images are also embedded within textual quotes or implicit references to the words of various writers: Patrick White,Arthur Rimbaud, Yukio Mishima... Both the works that we have studied this week are profoundly composite works of art. The are neither purely visual, nor purely verbal, they are an important fusion of ways of seeing – in order to see more widely: something in the direction no doubt of William Blake’s “fourfold vision”(don’t miss this last link!)

BLOG TOPICS ARISING FROM TODAY’S VISITS TO BLAKE AND WHITELEY.

General Blog Question: A short blog  expressing simply what inspired you most today, or what moment you felt was most illuminating, or what you enjoyed most about today…. one of these more relaxed topics would give life, animation and joy to your blogs… so go for it….. And remember please keep your excellent peer reviews up to date. Many of you are having fabulous conversations that are extending the boundaries of what we do in class. Enjoy!

If you want a more specific Blog Topic than the general one given in the previous paragraph then chose one of these:

← Art Consciousness and Spirit in Times of War
Australian Literature in the Early 20th Century! →