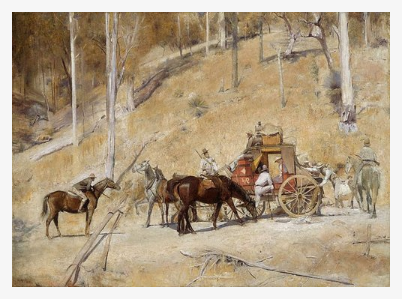 Building on last week’s excursion into the literature of the first half of the 19th Century in Australia, here is a quick survey of some of the material I will be exploring with you this week:

This is the period when the Australian idiom in both language and art began to come into its own. The years leading up to federation were years in which Australians were increasingly proud of their national identity and their relative freedom from European and British ways of looking at the world.

Audio lectures and tuts will be posted up here soon…

The tutorials explored the differences in subject matter, theme, purpose and language in the work of Henry Lawson and Banjo Paterson. We also explored Dame Mary Gilmore’s feminism in “Eve Song”- enjoy! 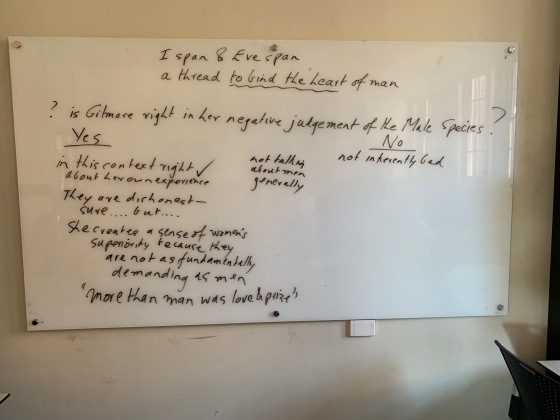 So today we looked at Ada Cambridge, Barbara Baynton, Dame Mary Gilmore, Henry Lawson, Banjo Paterson and on and on…. what an extraordinary cast of voices from this period that celebrated Australian independence from England both thematically and linguistically… the opening sentences of “The Drover’s Wife” show beautifully how Lawson has transitioned the language and themes from early colonialism to something more authentically “Strine”:

Nothing to relieve the eye save the darker green of a few sheoaks which are sighing above the narrow, almost waterless creek…. Four ragged, dried-up-looking children are playing about the house…..

So this is an extraordinarily exciting and new moment in Australian literature, both for the range of its radical themes and for the innovations and language and imagery that were appearing- in literature AND in art:

How dare an artist (here Tom Roberts) put a sagging tent and two oddly positioned men, having a billy of tea, into the middle of a “Work of Art”- what license! what proposterousness!!!!

We also looked at the following:

Ada Cambridge with her wonderfully strident defiance of being a simpering woman subject to male domination. Defying all stereotypes she speaks to her lover: “I may some day love a better man…. And then we must be free to kiss and part” (164). No wonder she was seen as rebellious in her day!

Then we looked at the Über-rebellious Irish Ned Kelly who certainly could string words together when he wanted to make a point about those for whom he had a particular hate (those representatives of the British legal system): “the big ugly fat-necked wombat headed big bellied magpie legged narrow hipped splaw-footed sons of Irish Bailiffs or english landlords which is better known as Officers of Justice or Victorian Police…” (224) and much more!

Then there was Dame Mary Gilmore, one of the few in this period who had a passionate regard for our Indigenous people and a real sense of what we as a community have lost by not taking care of them. Her poem “Australia” is a magnificent tribute to the ancient value of this people (predating all the most ancient civilizations) and containing within their culture the seeds of the beginning of language and poetry:

There was great beauty in the names her people called her,

Shaping to patterns of sound the form of their words;

They wove to measure of speech the cry of the bird,

And the voices that rose from the reeds of the cowal*.

So in their traditions and culture they transformed and transmitted the beautiful voices of nature into song, into language.

Blog topics for this week:

PLEASE REMEMBER THAT YOU MUST DO AT LEAST ONE PEER REVIEW EACH WEEK AND YOU NOW HAVE THE LIBERTY TO ROAM ACROSS ALL THE LITERATURE UNITS TO PICK AND CHOSE PEOPLE TO REVIEW.

CREATIVE Write a paragraph of prose in the style of Henry Lawson.

CREATIVE Write a stanza of a poem in the style of Banjo Paterson.

CRITICAL What does A.D. Hope’s poem Australia (written half a century after the 1890s) add to the debate on what is Australia?

CREATIVE “And then we must be free to kiss and part”. Write a short letter or poem that proclaims the kind of personal freedom that Ada Cambridge proposes in this line.

CRITICAL Write a brief description of this painting of Ned Kelly. What do you think it is saying about Ned Kelly’s status in the 20th Century

CRITICAL Write a short tribute to Dame Mary Gilmore drawing on any one of her poems (in the Pen Anthology 256-259) to show how important her ideas are to Australians.

CRITICAL Find out who the figure behind Dame Mary Gilmore is on the $10 note. What is the artistic significance of this other figure?

CRITICAL Henry Lawson or Banjo Paterson? Explain briefly your understanding of why these two authors were so different in their views of the Australian experience.

AND AS ALWAYS: Chose or find a topic of your very own that relates in some way to the themes of this week. Draw on your own experience if you wish. For instance: what is your experience of being a woman compared to Gilmore’s “Eve Song”?